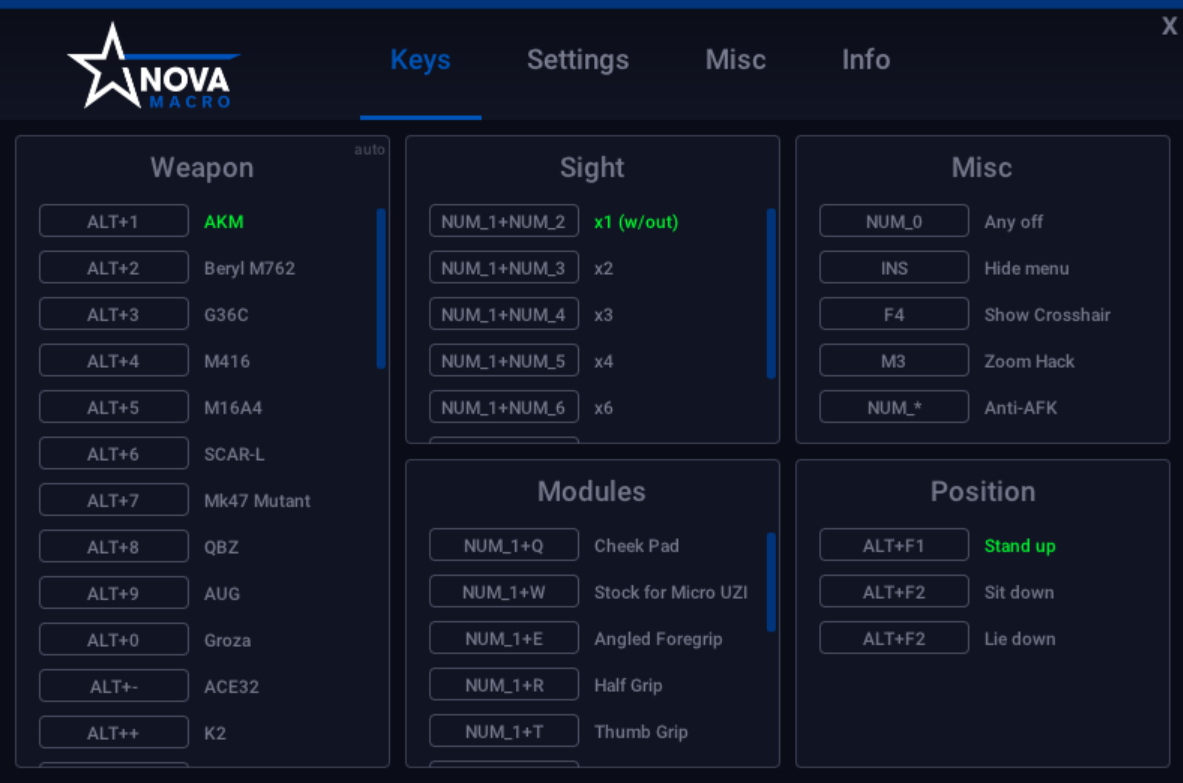 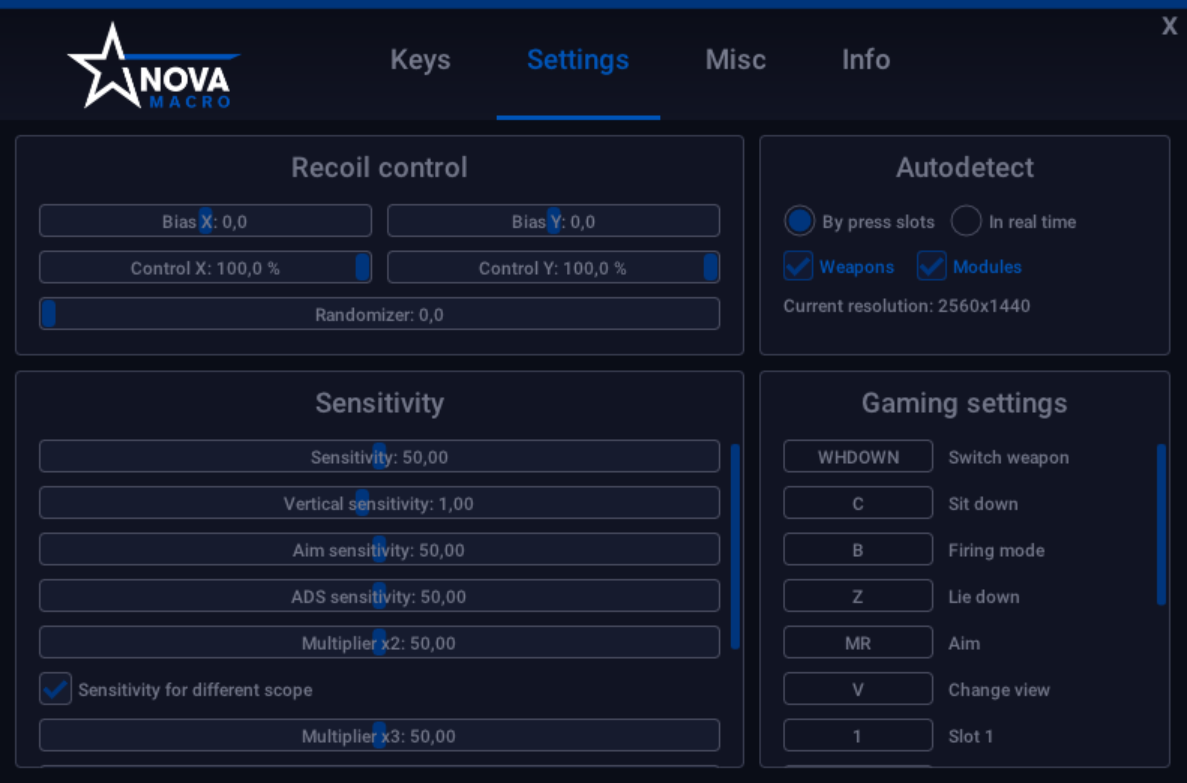 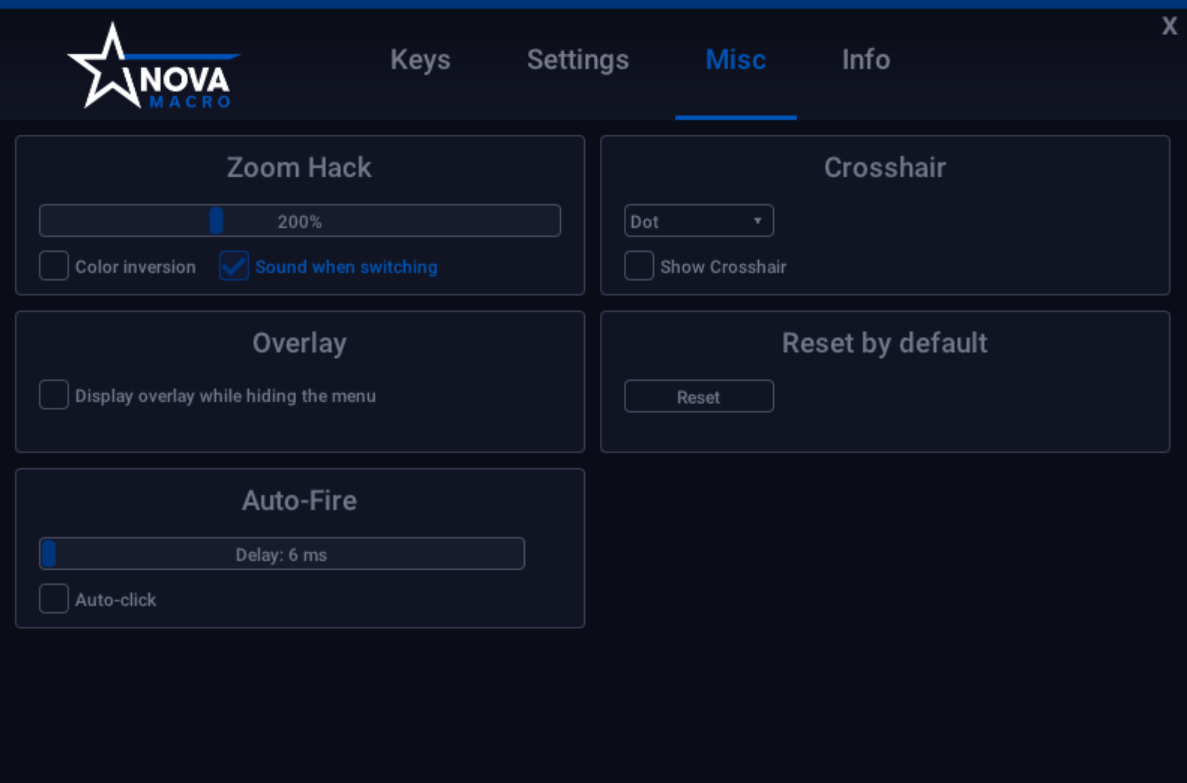 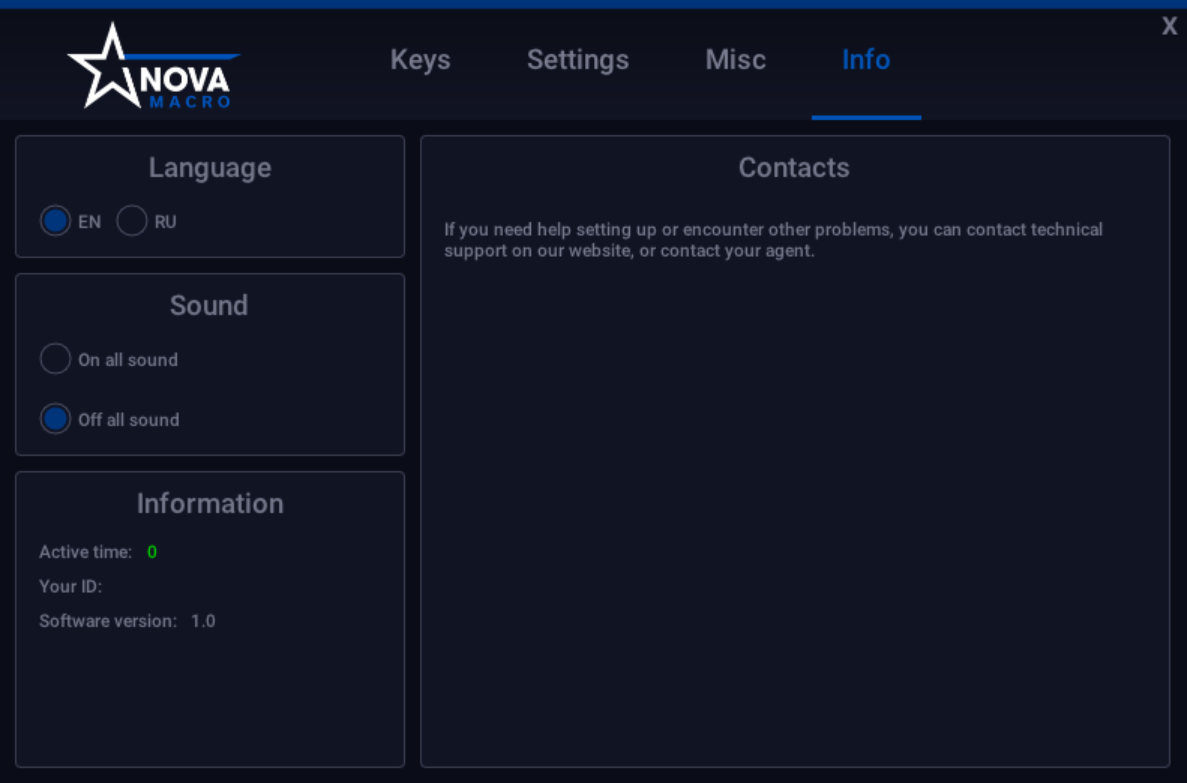 • Support for any mouse – no matter what mouse you play on, this script will work on absolutely any, whether it is a simple office or gaming from popular manufacturers, such as A4Tech, Bloody, Logitech, Razer, Corsair, etc;

• Autosetting – the program has a feature that, with a single click, will make all the needed settings to your parameters;

• Automatic weapon detection – the script will automatically recognize which weapon you are holding. Works at any resolution, screen aspect ratio, with any weapon skins, at any graphics and gamma settings;

• Automatic sights detection – script automatically recognizes which sight is on your weapon. Works at any resolution, screen aspect ratio, graphics and gamma settings;

• Automatic attachments detection – script automatically recognizes which attachments is on your weapon. Works at any resolution, screen aspect ratio, graphics and gamma settings;

• Recoil compensation for all weapons – the recoil control system supports any weapon, and every season we release an update with a new or changed weapon;

• Automatic position detection – as you know, every weapon and every position ( crouch, standing, lying down) has completely different recoil. The AI script automatically detects which position you are in and adjusts its recoil control for each weapon;

• Automatic detection of firing modes – hip-fire, shoulder-fire and sight-fire, the script automatically detects which firing mode you are shooting in and adjusts the recoil control to each weapon;

• Remember attachments – when you switch weapons, the script will remember all attachments that were put on your weapon;

• Combination sights and attachments – you can combine any sight with any attachments on any weapon, the script will adjust to your choice;

• Bias Adjuster – if you wish, you can adjust the script work bias in any direction;

• Recoil Level Adjuster – you’ll be able to lower the recoil control level, on either axis;

• Menu – You’ll be able to change each setting in an easy-to-use graphical interface;

• Zoom Hack – function with which you will be able to zoom objects that are at a great distance without using additional sights, as well as invert colors.

• Rapid fire – with this function, any semi-automatic weapon turns into an automatic weapon with the highest possible firing speed (including bow, shotguns, and single-shot modes);

• Binds – you will always be able to customize the switches of weapons, attachments and additional functions with customizable binds;

• Sound alerts – the script has sound alerts when switching weapons, attachments or additional features, you can always turn them off;

• Graphical sight – if desired, you can include an additional graphic crosshair;

• Anti-AFK – This function will not let you get kicked off the server for a long afk and you do not have to stand in line again, just turn it on if you are going to leave your computer for a long time;

• Hide menu – hiding the menu completely with one button, without turning off the script, this feature will be useful when streaming on Twitch, YouTube or Discord;

• Optimization – we are trying to bring the optimization to the maximum, to give the opportunity to play with scripts even on weak PCs;

• Cloud gaming – the script supports any cloud services, such as GeForce Now and others;

• Inventory detection – script detects when you are in the inventory and disables its work, for convenient use or drag items;

• Grenade detection – the script disables its work for easy aiming of the grenade, when it is used.

• No injections – our scripts never affect game files and no functions require it, all functionality is based on artificial intelligence;

• Updates – the script has automatic updates, you will always get the current version when you run it.

Windows of any version

Yes (mute and hide the menu)

1. Select the subscription format by location – “CIS” or “GLOBAL”. Be careful when choosing the “CIS” tariff, if you do not live in the CIS countries, then you will not be able to activate your key, in this case you need to buy a subscription format “GLOBAL”, which can be activated anywhere in the world;

3. Choose the tariff you are interested in and you can pay for your order.

• The payment and issuance system works fully automatically 24/7, you do not need to wait for administration to get your order;

• Subscription time begins to count down, once you enter the key in Loader, you can buy multiple keys and activate them whenever you want, even after a year;

• When you buy “Lifetime” tariff you automatically activate your GLOBAL status;

• When you purchase the “Lifetime” plan, free updates are provided for new seasons of the game;

• If you have not found a convenient way to pay, then contact our administration on any contacts at the end of the site, they will help you find a solution.

Our team uses the latest approaches to developing private software for popular games: machine learning and artificial intelligence without interaction with game files.